Joby’s GorillaPods are the hottest camera tripods these days. This popularity is well-deserved. As we have all experienced, a twistable, bendable, and super-portable tripod is not just a good idea. It actually works, and it’s especially helpful for solo adventurers, photography enthusiasts (and even pros), and vloggers.

Now, we wish we could tell you to forget all the other brands and just go for a Joby, but we can’t because GorillaPods – no matter how great they are – have limitations.

Another brand that has a solid following is Pedco. Just like Joby, it has a line of tripods, and one of the popular models is the UltraPod II. Will this brand make up for the limitations of the GorillaPod?

In this Gorillapod vs Ultrapod II comparison report, we aim to accomplish two things:

Let’s jumpstart this Gorillapod vs Ultrapod II report with a side-by-side comparison of these tripods’ top specs and some features.

Based on the chart we made in the preceding section, the GorillaPod and Ultrapod II tripods share very few similarities. For instance, they’re almost the same as far as maximum safe load is concerned. Also, they both require a ball head so you can enjoy panning and tilting capabilities.

Let’s explain in detail how the GorillaPod differs from the Ultrapod II.

The GorillaPod SLR Zoom has three very flexible legs with rubberized joints. You can twist them and wrap them onto an object to secure them in place.

For the Ultrapod II, one of the legs is longer and thicker than the other two, making it an ideal tripod if you want to use a longer lens. In contrast to the GorillaPod, the Ultrapod II’s legs are L-shaped, which allows you to press them tightly on to posts and other similar objects. Because it has a Velcro strap, you can secure this device onto a stick and then turn it into a monopod.

When it comes to size and weight, the Ultrapod II (image below) wins over the GorillaPod SLR Zoom by a big margin. It’s 2 times lighter, and when in its folded state, it stands 7 inches (or about 3 inches less than the SLR Zoom.

If you’re a traveler, the Ultrapod II is the better choice. You can easily fit it in your backpack’s pocket. In contrast, the GorillaPod SLR Zoom can still be bulky, so packing may require some effort. 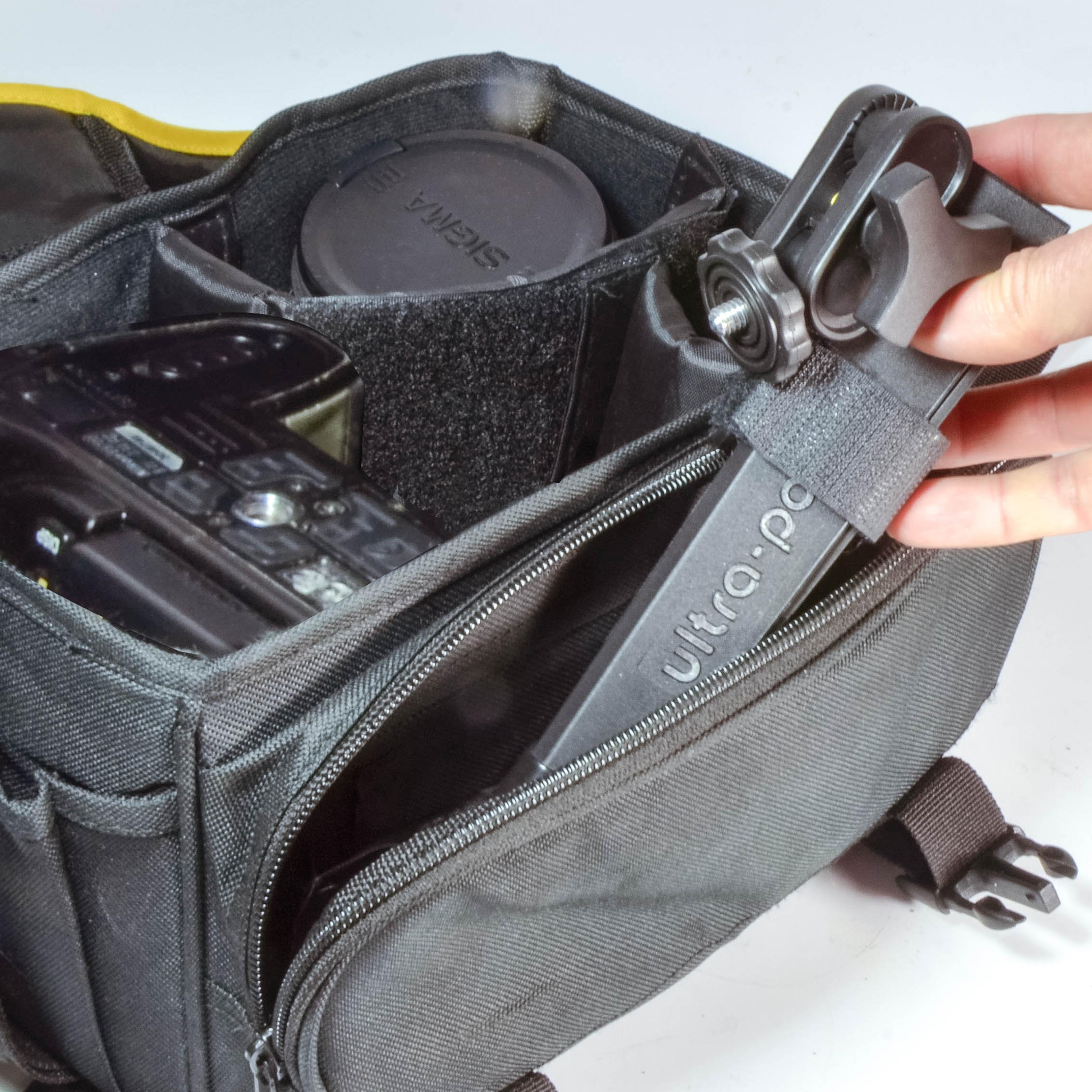 Both Ultrapod II and SLR Zoom have the ability to “cling” on to a tree, a pole, or any sturdy object. However, they attach to these objects differently.

In the case of the GorillaPod, the flexibility of its legs does the trick. Bend or twist them however you like to give them a nice grip.

On the other hand, the UltraPod II uses a removable D-ring VELCRO brand cinch strap to secure itself and your camera to an object. You can already see the disadvantage of this. Over time, the strap can loose its gripping.

The Ultrapod II is mostly made out of plastic (i.e., black nylon resin with aluminum threaded components), but don’t be alarmed because it’s highly durable. Plus, don’t forget that the feet are covered with non-slip vinyl, which should help with stability.

The GorillaPod SLR Zoom has over two dozen leg joints, and each joint is made of ABS plastic with rubber rings. This combination helps secure the joints so they stay firm and grippy.

Here are other pros and cons given by consumers.

To end this Gorillapod vs Ultrapod II report, here’s our recommendation.

Both tripods are very versatile and extremely helpful especially for solo travelers, but if you have to choose between the GorillaPod SLR Zoom and the Ultrapod II, get the Ultrapod II. Why? Because it’s much lighter, it’s easier to pack, and it’s more affordable.

If you still want a Gorillapod but don’t have the budget for it, consider these OEMs or knockoffs.